US midterm election’s result may have major impacts on the future trajectory of Ukraine war. However, the “energy war” between Russia and the West will not dissipate anytime soon, apparently either side has suffered enough. According to US EIA, “Russian Seaborne Crude Exports Remain Despite (west) Sanctions.” So, the real impact of Europeans announced “ban on seaborne imports of Russian crude on December 5” will have to be verified later. But it is clear that the ban will not have any impact on the ground war of Ukraine.

Even if the west were completely successful on not import any drop of Russian crude oil, major energy importer nations including China and India will continue to buy cheap Russian oil. It is just routine market business: the price is just right. Whatever the government intervention of the Europe oil market with bans, sanctions, price caps…Crude Oil is a matured global market. Global oil price is directly determined by the balance of supply and demand.

The artic shortest passage between Europe and East Asia will only become more and more popular for global trades. But it will enhance Russia’s global influence because Russia controls the route, and it is best equipped to take advantage of the new passage. It also will enhance Russia-China “business partnership.” Most significantly, this new route will definitely see increased trade flows because of the trend of global warming.

Russia is sending an ice-breaking tanker of oil to China via the Arctic Circle, opening up a faster route to Asian buyers

Russia is sending an ice-breaking tanker of oil to China via the Arctic Circle, only the second time it has explored a route that promises to get crude to Asian buyers more rapidly.

The ship, the Vasily Dinkov, took on a small cargo of oil from a storage vessel in Murmansk in late October, according to Bloomberg data. It’s now making the arduous 3,300-mile journey through typically iceberg-laden seas to the Chinese port of Rizhao, where it’s scheduled to dock Thursday next week.

The voyage is the shortest ocean route between Europe and east Asia, taking half the time to reach China from Russia’s Baltic ports than the standard passage through the Suez Canal.

That route could turn out to be vital come the warmer summer weather, Viktor Katona, a lead analyst at research firm Kpler, told Bloomberg.

“Europe is already sealed off,” he said, referring to importers on the continent shunning Russia’s energy supplies due to the Ukraine war.

“If they’re not buying, why circumnavigate the entire universe if you can use the Northern Sea Route to get to China in 20 days?” he said.

The European Union plans to bring in a ban on seaborne imports of Russian crude on December 5, meaning the EU market will effectively vanish for Moscow. Its crude oil shipments to the region have already plunged 60% since its February invasion of Ukraine.

The measure will bar EU tankers from transporting Russian oil — meaning deliveries to alternative buyers in India, for example, will take 10 times as long.

Like India, China has been snapping up Russian crude sold at a discount as Moscow seeks alternative buyers to its European market. Seaborne shipments of the oil hit a five-month high last week as vessels scrambled to leave port in time to make their deliveries before the EU embargo takes force. 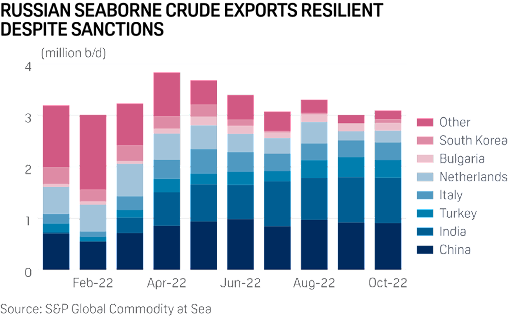 – The prospect of EU sanctions kicking in soon has so far failed to dent Russian crude exports as seaborne flows rose to 3.1 million b/d in October, up 3% on the month and in line with pre-war figures.

– Total exports to EU countries have reached 800,000 b/d, slightly above pre-February levels, however, most of those deliveries have gone to the Mediterranean.

– At the same time, Russia’s product exports have been declining as exporters struggle to compete with Asian and Middle Eastern refiners, with the Asia pivot mostly limited to fuel oil so far.

– With the foreign ministers of India and Russia meeting this week, the former’s top diplomat Subrahmanyam Jaishankar said India will continue buying Russian oil because it benefits the country.

The Problem is with European Leaders

Projections for a Bad Global Economy